In a word, the outlook for the Greater Vancouver real estate market in the next year is ‘good’ according to industry sources. The British Columbia Real Estate Association (BCREA) points to continued economic growth as contributing to a boost of sales in 2019. The Real Estate Board of Greater Vancouver (REBGV) cites historic trading patterns that will see average prices of detached homes dropping 21-percent in 2019.

Cameron Muir, Chief Economist for the BCREA, says that Multiple Listing Service sales are projected to record a dip of 23-percent compared to 2017. However, he is confident that the strong economy “combined with favourable demographics” will have a positive impact on home sales in 2019. So much so, that Muir expects the sales figures to exceed the 10-year average in the next 12-months.

Renting Vancover Condos : What is the Return on Investment (ROI)?

Forget gold, “invest in Vancouver real estate” is the message from the world’s biggest asset manager, Laurence D. Fink. Despite the craziness of Vancouver real estate, what is the actual ROI  these days base on rental income?  We all agree that the housing price is not going to be uplifting as fast as was it was  3 years ago. Many people are not in rush to sale or to buy a property. Instead, people a holding them and renting the units out.

1 & 2 bedroom condo has always been a popular option to purchase and rent due to high demands. Let’s look at the overall ROI in the major cities in Greater Vancouver.

Thanks to the latest information from rentboard.ca and zolo.ca. Below is the calculation:

Vancouver is the highest populated city in Canada. It’s classified as the top-five global cities with a good and affordable quality of life. It was ranked top 10 in the world’s most well-living towns and. This article reports the latest real estate statistics in Vancouver. It also provides an extensive analysis of all the real estate news and trends.

Vancouver’s real estate news economic trend has been forecast to grow to 2.5% in 2018. This shows an upward direction from recent years. From recent surveys in Canada, there’s a high investor demand and redevelopment opportunities expected to take place. However, most investors and regional developers expect an increase in interest rates, and it impacts on the policy changes. This will lead them to be more reserved or conservative in 2018. Due to this, the industrial veterans plan on preparing for a turnaround by:

5 Reasons Why Vancouver Real Estate Prices Are So Crazy

The city of Vancouver belongs to the Greater Vancouver Regional District. This dynamic city has the qualities of a port city and the charm of the Canadian mountains. It is impossible to talk only about the city of Vancouver, not to mention the surrounding districts such as West Vancouver, Richmond or Surrey to mention but a few.  Living in Vancouver means living in one of the most cosmopolitan and highest-quality cities in the world. All this raised it to the highest standards in real estate development worldwide and therefore housing prices are stratospheric. The reasons that real estate prices are so crazy:

Vancouver, one of the largest Canadian states, is known for having the most unaffordable real estate conditions in Canada, and is currently being rated as the most unaffordable in the entire North American market! Fluctuations in Vancouver’s real estate market put it under continuous evaluation and analysis in attempts to provide the residents with educated suggestions on their investments in residential properties. The July/August 2018 residential properties market in Vancouver has been particularly remarkable with abnormal sales rates and price variations.

While the summer season is generally known to be a dormant period for the real estate market, this year’s summer sales in Vancouver are significantly lower than previous year’s rates. In fact, the reported values of 2,070 sold properties in July 2018 is the lowest that the market has seen since July 2000. The estimated overall property sales rate in July 2018 has been reported to be 14.6% less than the previous month (June 2018) and around 30.1% less than that of July 2017.

For years the Real estate industry has been among the most lucrative sector in the world. The sector has made some people who decided to invest in the sector super rich. Over the years the sector has grown tremendously. It is not surprising to see foreign investors pouring millions of dollars in the same industry. In the past real estate in Vancouver, was dominated by the local investors. However, recent stats have shown that the trend is slowly changing with non-resident slowly taking a piece of the real estate pie. These recent findings can be attributed to the hues and cries caused by activists and academics who believed that recent increase in Vancouver properties prices was due to non-resident purchases.

Higher prices, rising rates, new tax announcements, and latest mortgage requirements are all playing important factors towards the plummeting of housing sales in the Metro Vancouver area. As housing sales dipped to the lowest level in the recent years, Metro Vancouver’s new homes have soared in the initial quarter of the year, with stats in Vancouver alone being more than twice as high as the same period in 2017. There were 6,542 home sales on the Multiple Listing Service (MLS) in Metro Vancouver during the initial quarter of 2018, which is a decrease of 13.1 percent from the same period last year. This represents the region’s lowest first-quarter sales total since 2013, reported by the Real Estate Board of Greater Vancouver (REBGV).

The overall housing sales in the first quarter of the year were the lowest in the past 5 years. In fact, even the local listings of detached, attached and apartment properties dropped by almost 7 percent in March as compared to previous year. But total housing stats across the region increased to 6,864 units in the first three months of 2018, up by 30 percent from the last year. Massive increments were also noticed in the Northern Vancouver area, where about 1,422 new homes were initiated, comparable to only 107 in the same period the preceding year. Even though there have been almost 43,000 new homes under construction across the Metro Vancouver area, the current inventory remains incredibly low. 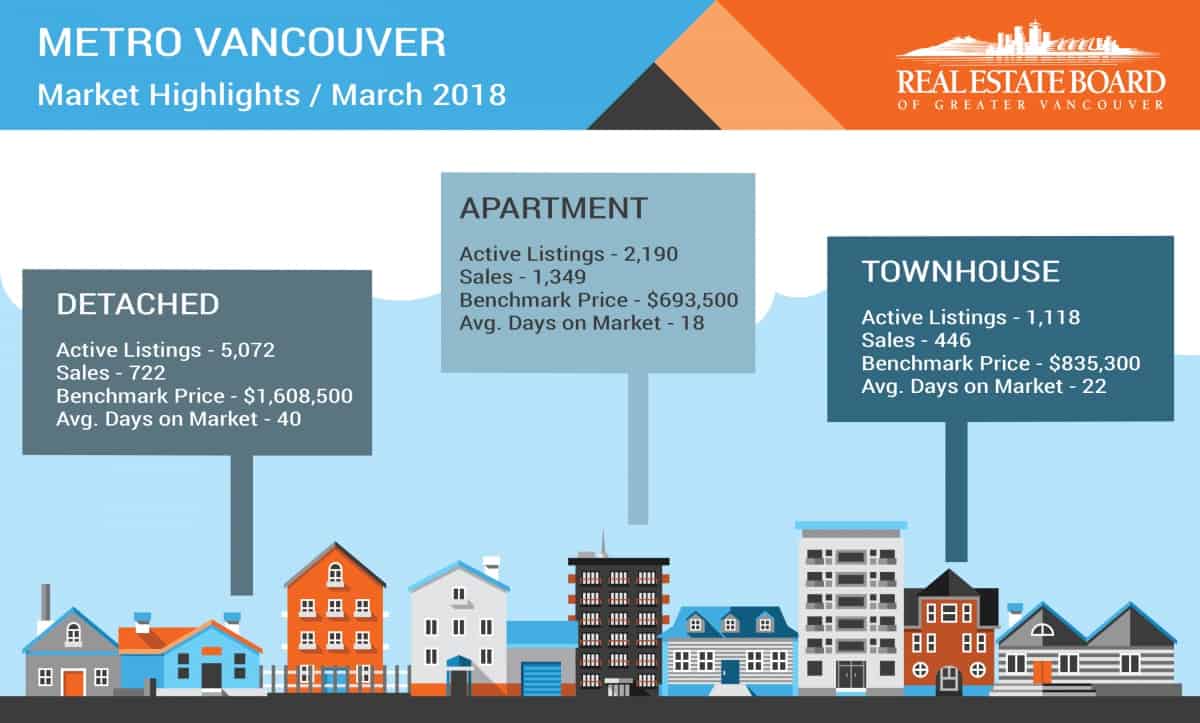 Sales have started to outstrip supply for condos and townhouses. The benchmark price for a condo was close to $700,000 in March. This is a leap of 26% compared to the preceding year. Standard townhouse prices across Metro Vancouver reached $835,300 last month, which is a 2 % hike over February and an overall 18% rise from March 2017.

Renters are paying the real price when it comes to living in these highly expensive areas. According to the Canada Mortgage and Housing Corporation, average rent has nationally gone up previous year by 2.7 percent to $947 per month. Meanwhile, rental property is becoming tougher and tougher to avail. The CMHC says that the overall vacancy rate for cities across the country was three percent in 2017, down from 3.7 percent in 2016. In its annual report on housing rentals, the corporation said the demand for a purpose-built apartment is outpacing the growth in supply, while the rates of condos rented out are also declining.

This uncontrollable price outburst has taken the market by surprise. This is becoming a serious concern for both businesses and residents looking to recruit new candidates. It is becoming immensely cumbersome to buy quality real estate in Vancouver. The government of British Columbia is looking to follow new measures intended to mitigate the highly inflammable housing costs.

Increasing construction can meet the rising demand for rental studios and multi-family homes. Beyond that, it wouldn’t hurt for people to look for suitable accommodations adjacent to or on the outskirts of the Metro Vancouver area!