There Is Moderate Risk in Investing in Vancouver, Sellers Now Listing Their Property at A Reasonable Price

It is no news again that the Vancouver real estate market is experiencing a tough time except for 5 neighbourhoods that remain strong. The month of July and early days of the new month of August have been witnessing a slight change in the story. How? Did the housing price exponentially increased overnight? No. But a recent report released by the Canada Mortgage and Housing Corporation (CMHC) revealed there is a moderate risk in investing in Greater Vancouver’s real estate.

The improved ratings according to the report is as a result of the decrease in the frequent increase in housing price; thus, lower home prices.

Another report compiled by the Real Estate Board of Greater Vancouver (REBGV) also showed improvement in the number of home sales in the month of July ― about 2,557 sales were recorded. This is more than 23.11 percent compared to the same time in the previous year. This, however, is in no way compared to that of the time before the market plunge. Although the real estate property prices are still falling, the benchmark in July is slightly better than that of the previous month. 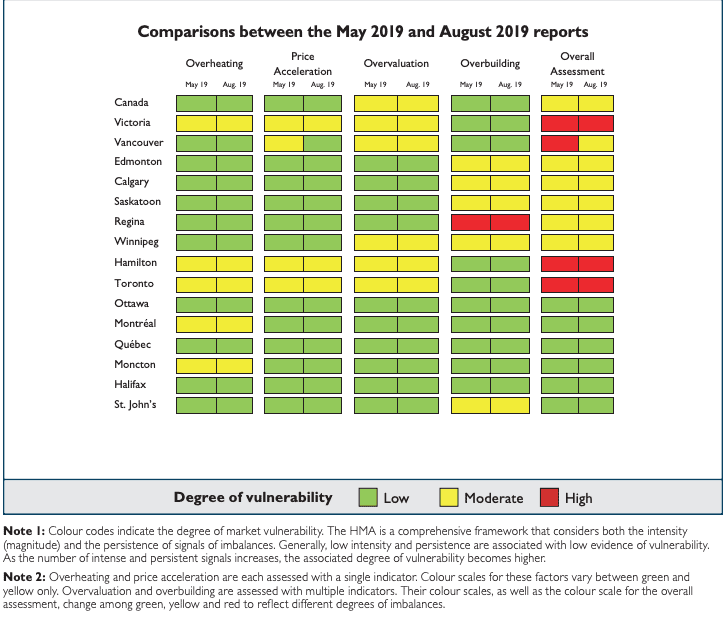 How is this possible?

The poor performance of Vancouver real estate is due in large part to the listing price by sellers. This slight positive change in the month of July can be accrued to the fact that sellers prices are now considered to be “more reasonable” by the buyers. Plus, there are lesser new listings in the month of July than June, thereby creating some market balance ― the sales to active listings ratio (SALR) was recorded to be 18 percent. 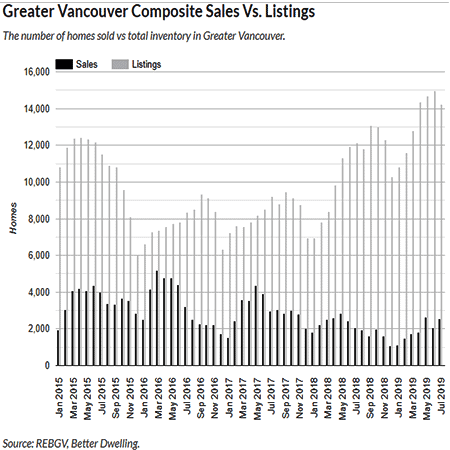 Mainlanders Moving to Island in Search of Better Deal

Housing sales in areas of Vancouver Island are observed to be steady. The Vancouver Island Real Estate board president-elect, Kevin Reid argued this is largely due in part to the migration of the mainlanders in search of a better deal to the region.

There are areas in the Island where the sales price is a little bit hiked due to the high demand. On careful analysis, the hiked price is a fraction of the worth of the same property in their home areas.

On average, a home on the Sunshine Coast is estimated to cost $636, 000. The price is about 9.7 per cent reduction from the listing price of the previous month. This is another indication that the sellers are now listing their homes in the range buyers are comfortable to pay.

More Homes Are Being Built In Vancouver

The number of new homes built across the country has been decreasing monthly but this year is discovered to be different. SAAR publication showed there are 209,122 new buildings in July. That is a 10 per cent starts increase across the nation in comparison with the previous year (July 2018).

Vancouver and Montreal are the main contributor to this increase. In Vancouver, there were 31,852 starts in July alone, a 26.05 per cent increase from the number of starts the same time last year.

Experts predicted this sudden increase should not be expected to replicate itself because of the rate of pre-sale absorption.

If you examine the chart that summarises the CMHC report highlighting the vulnerability of investing in Vancouver, you will notice Vancouver is labeled “low vulnerability” (Green) under the overbuilding assessment. In case you are wondering why it is given such rating in spite of its increased starts rate, here is the reason. Most of the new buildings are usually acquired before completion. 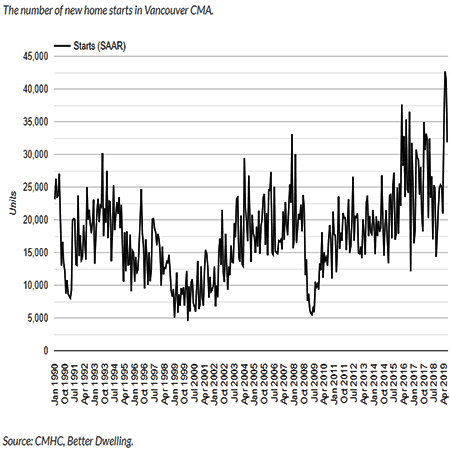 How Long Will Vancouver Remain the “City of Glasses”

Vancouver is known as the “City of Glasses” because of its tall glass buildings but the clamour for a need for change is on the rise. Glass buildings are considered to be the biggest producer of carbon emission ― a threat to the environment. The International Agency said it contributes approximately 40 per cent to the global carbon dioxide emission.

The Vancouver developer, Bruce Langereis is also said to be pushing for the approval of his 40-storey world tallest “wood building”. This kind of building is presumed to be safer than glass buildings as much as the environment is concerned.

In support of the project, Andy Yan, the director of The City Program at Simon Fraser University commented: “wood is good”.

The slight improvement in the sales of Vancouver real estate property is not enough to convince developers that the market is looking promising again.

Many pre-sale buyers of the Richmond’s Alfa condominium project woke up in July to a notice from the developer informing them of the cancellation of their contracts for homes currently under construction.

There are lots of developers like Richmond Alfa that are delaying their projects such as Coromandel Properties and Cressey. Most of them are reported by Business In Vancouver to now be shifting their focus towards building rental and office space for commercial use.

No ‘Doom and Gloom For [Vancouver] Commercial Property Prices’

Unlike the residential real estate properties in Metro Vancouver, the commercial property has been experiencing a good time. This is quite unusual because historically, anything affecting either reflects on both.

The senior vice-president of Real Capital Analytics, Jim Costello was quoted by the VancouverSun to have buoyantly said; “I don’t see doom and gloom for commercial property prices in Vancouver,”. While justifying his reasons, Costello noted that the main reason why the commercial market remains strong is that it does not experience the same amount of price escalation as the residential property market between 2014 and 2017.

The Canadian Real Estate Association MLS report, for instance, revealed home price index increased by 17 per cent between 2014 and 2017. On the other hand, Real Capital Analytics report on the commercial property within the same time frame revealed it only increase by 11 per cent.

Looking away from the stats, the stability of Metro Vancouver economy is another factor to consider. This is not associable to the residential property because of the implemented foreign buyers tax that forced many foreign buyers out of the market.

Considering the reputation of Vancouver as a friendly tech hub, the commercial real estate property pricing can be expected to continue its smooth ride.